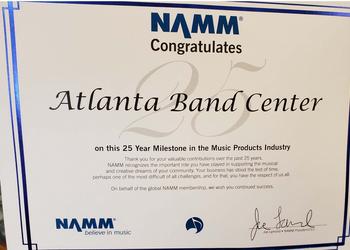 Atlanta Band Center is dedicated to supplying everything the student musician needs. We provide vital guidance and support at every step of a musician's journey, from selecting their instrument to the awards that mark milestones along their way.

As your musician grows, Atlanta Band Center stocks the gear that will keep all musicians moving forward, from reeds and mouthpieces, books and stands, to the next level instrument.

After gaining 15 years of experience with other music stores, Atlanta Band Center was conceived and implemented in 1994. The first store was opened in Tucker, Georgia, and later moved to Stone Mountain, Georgia. In August of 2012, we moved to a larger facility in nearby Decatur to better serve our customers. We serve the Metro Atlanta area public and private schools. Atlanta Band Center is not limited to Metro Atlanta and also serves schools in other counties and states.